Vast fields of Golden Poppies have ever been one of the strong and peculiar features of California scenery. The gladsome beauty of this peerless flower has brought renown to the land of its birth. Present everywhere, at all times in some form, it is not surprising that it has taken firm hold of the affections of the people,and that the homage of the nature-loving world is so freely offered it.

In California, we're a little weird. (I'm sure this doesn't surprise anybody.) Instead of spring being heralded by snows melting and temperatures soaring and birds returning, we look for one little flower. It grows on the sides of roadways and anywhere else it can get a purchase. And it only appears through one crucial period, the gap between the rainy season and the sunny season, which is the most glorious time to see this fair state of mine. Because not only is everything green and not faded to the golden-brown of dead grass at the end of summer (although that has its beauty too, for those who can appreciate those things), everywhere there are spots and seas of bright orange, where the poppies poke through. 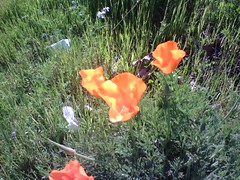 This is the famed California Golden Poppy, the state flower. They only appear at one time of the year, roughly in the period between February and April, when the rains have died off, but the summer heat hasn't quite returned yet. (Wikipedia cites a period between February and September, but there is only once I recall seeing them out of the period I mentioned, growing out of a crack in the sidewalk in Berkeley in September.) They're beautiful and fragile and utterly wonderful. They're so special to Californians, that a myth has grown up that it's illegal to pick them. At least, I think it's a myth. I'm not about to go and start picking them to find out. Let other people enjoy the splotches of gold that dot the green as well.

But it's one of the first signs of spring out here in California, and so I figured I'd share these two photos of the first poppies I saw this year. They were growing on the side of a gully mere feet from a major intersection in my part of Sacramento. I had to take a picture; it was simply one of those moments of wonder that I felt I had to share.
Collapse