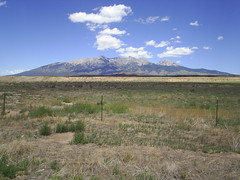 Okay, so why in all of the seven hells am I looking up the best approach for climbing Blanca? I mean, other than the fact that my brain seems to think that climbing a fourteener is a really good idea? (And yes, kat, if climbing a fourteener is such a great idea, why don’t you go climb one of the fourteeners in your state instead of traspising all the way out to Colorado? Shasta’s been a goal for a long time… aaaaaaaugh.)

In all seriousness, I like hiking, and I would like to climb a fourteener, which is mountaineer slang for “a peak over fourteen thousand feet in height.” Most of the fourteeners in the Lower 48 are in Colorado (duh), but there’s a few in California and, of course, Seattleites will point to their own fourteener when they can see it through the rain. Or snow, as the case may be. See here for a complete list.

And I would probably do Shasta first, simply because, dude, that’s my mountain. But… :)