Why you should never let katster play with her food

So the neighbors made us cupcakes for Easter. This, of course, ends with me goofing around with cupcakes, microwaves, and the digital camera on my Blackberry… 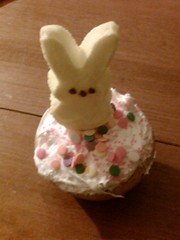 Our story starts with an innocent Peep on an innocent cupcake, a normal residence of Cupcakelandia, on the fair continent of PlasticaPlate. Obviously, all is right with the world. But little does our peep know that the world is going to get very … interesting. Yeah, that’s the word we want, interesting. It is a tale most foul…

Of course, in Cupcakelandia, sitting on a cupcake without the permission of the monarchs is a crime. So our innocent little peep gets thrown to the wolves and is oppressed by the two Peeps who sit in judgment on the Cupcake Thrones! 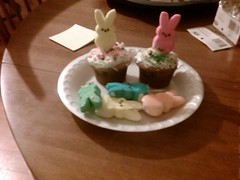 Oh noes! Our innocent little peep is being oppressed! What is there to be done? Well, it seems the rulers of Cupcakelandia are looking for a peep to be experimented on! And they pick our poor innocent peep! What will become of him or her, as we completely failed to give our peep gender when we started this story!

At the Kenmore Nuclear Test Chamber, our peep is strapped to a gurney and placed inside to be radiated by powerful forces for thirty whole seconds! Will our peep survive such awful treatment? In the wreckage of the test range, we found a journal with the following entry: 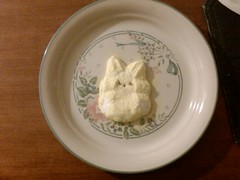 Subject Y. Peep was accidentally placed in the test chamber for approximately thirty seconds. Subject emerged as a irradiated SuperPeep and stormed off in the direction of the capital muttering something about those bastards on the Cupcake Thrones. I fear the worst.

The scientist who recorded this missive was obviously lying on at least one point, as the irradiation was done quite deliberately and with malice aforethought. Also, I suspect SuperPeep trashed the Kenmore Nuclear Test Chamber before going on his mission to destroy the Peeps on the Cupcake Thrones! This would make sense given his awful treatment at the hands of the scientists at the place. Perhaps our mystery scientist was trying to cover up his role in this plot. We may never know. 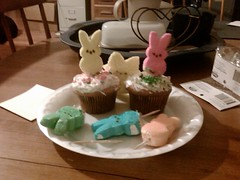 News photography in Cupcakelandia brought us this last image before we lost all transmissions. It shows an obviously larger SuperPeep behind the thrones, just before SuperPeep ascended the thrones and destroyed them and their rulers. It was a marshmallow bath, folks, and that sort of thing is just not okay for the kiddies to see. I mean, marshmallow all over the place? Are you some kind of pervert or something? It didn’t really matter, though, as our cameras lost power, possibly from SuperPeep’s irradiated hide, shortly thereafter.

(Read: katster got bored with taking pictures and decided to eat peeps instead. Note, microwaved peeps are not as good as normal peeps, as the chewy goodness becomes sugary tasting rubber.)

Tags: my life, pictures, what is she smoking?, writing
Subscribe