At the new office…

It was very strange this morning after I dropped my mom off at her work in Rancho Cordova. Instead of doubling back to Folsom Blvd and following it all the way back down to the office at the corner of Watt and Folsom, I instead got on Highway 50 and headed for downtown. Yeah, the office moved downtown, very close to the corner of 5th and Capitol here in downtown Sacramento. Today’s the first day for the company at the new office. It’s going to take some getting used to.

I’ve already had to move cubes once today as the first cube I chose was driving me absolutely crazy — I’ve found out that I really don’t like sitting exposed with my back to the rest of the office. I’m not sure if it’s involuntary reactions to the times my mother sat quietly behind me watching me do things when I didn’t know she was there or if it’s just the occassional bout of paranoia that I’m prone to. Anyway, I’m much happier in my new cube, where I can see most of the office and don’t feel like everybody’s staring at me when I’m not looking.

Another thing that keeps striking my brain as wrong is the cubicals. Instead of the old full-high cubes, our new cubes are half-height, so if I lift my head, I can see across the office. (This also may have played into the involuntary twitch reaction.) They’re also beige instead of the blue-grey our prior cubicals are. For the most part I like it, as it’s nice to have line of sight to the far end of the office, but I miss the storage space up above the desk that our old cubes had.

But anyway, some normality is returning to my world as Luigi and the bad dudes are now adorning the top of my cube again, the binders with my ESX guides are sitting on my desk, and the only thing I’m waiting on to make my cube fully my own again is to hang up some important papers on the walls. It’s still a bit bare, though. I should find a good Cal picture (or maybe a pennant) to hang in the corner and make this cube even more my own. 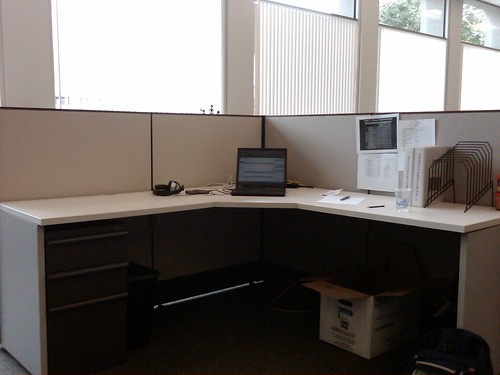