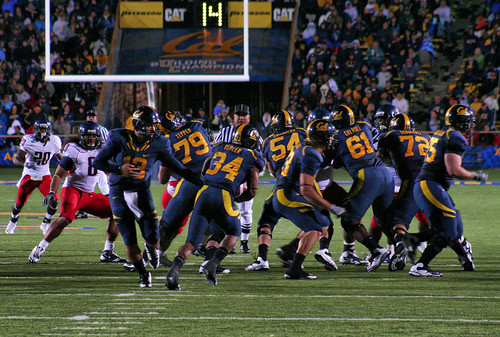 There was a point in time where Tedford seriously considered bolting for another job. Those opportunities came early during the Tedford era, fresh off of Cal’s most impressive season to date in 2004. However, one of the main reasons why a lot of Old and Young Blues alike have an adoring respect for Tedford has been because of the coach’s loyalty to the program and his desire to not only win, but win at Cal.

So it turns out that Saturday will be Coach Tedford’s 100th game. This is a nice article about the change Tedford’s made at Cal — not only in terms of making the football program a winner, but for his part in turning boys into men.

My undergraduate career at Cal was the football seasons from 1996 to 1999. In those four seasons, Cal went a depressing 18-27. We made it to one bowl my freshman year (which we lost to Navy), we never won the Big Game, and we were pretty much the conference doormat. We also cheated, and rightfully got slapped for it, but it’s not like we could even cheat right — the point of cheating is to win, no?

Anyway, the highlights, which were few, were beating Oklahoma twice (although those OK teams weren’t very good) and taking three of four from USC — but they weren’t very good at the time either. Then, it culminated in the disaster of 2001, where my beloved Bears went 1-10. Okay, I admit, by the end of it, I was idly rooting for a “perfect” season, but we managed a win in the last game of the season, a postponed-by-9/11 game with Rutgers in New Jersey. I still maintain that if we’d played Rutgers when scheduled, we’d have won that game and gained the confidence to take a couple over the course of the year, but I can’t prove it, and if it had worked out that way, then it might not have lead to something good.

The good, in this case, was the fact that we managed to convince the offensive coordinator from an Oregon Ducks team that really should have played in the National Championship that year to come to Cal and be our head coach — a dude named Jeff Tedford.

Tedford said that from the beginning, he wanted to change the football culture at Cal. And when, that first season, my first year as a grad student at Cal, I was in the stadium to watch Cal completely blow the Baylor Bears out of the water 70-22, and when the first Cal play from scrimmage went for a touchdown, I began to believe again. When we went 7-5 with the same players that had gone 1-10 the year before, and would have gone to a bowl if it wasn’t for the aforementioned cheating, things got a bit better. Of course, the greatest thing was finally seeing a Big Game victory — the first Big Game victory for Cal since I was a junior in high school.

Being a Cal fan’s a hard thing. My Bears are pretty much the Chicago Cubs of college football. The last time we went to a Rose Bowl was in 1959, and Cal fans start every year with the high hopes that this will be the year in which we go to the fabled promised land of Pasadena, California for New Year’s Day. And year after year, the hopes turn frail and bitter as the Bears inevitably find ways to lose games they shouldn’t, or have the unfortunate luck to get good just as USC is putting together a dynasty for the ages.

This season’s been a really disappointing one — we thought we finally had all the tools into place to beat USC and take the Rose Bowl. Well, USC won’t be going this year, but Cal isn’t in position to take advantage of it. About the best we can do is play spoiler to Stanford’s Rose Bowl dreams, and, well, that ain’t looking overly good. (Did you see what Stanford did to Oregon and USC? Wow!)

But get rid of Tedford? Are you kidding me? He’s 66-33 overall. That’s a pretty good winning percentage — and he’s done it at Cal, where the institutional support is always going to be somewhat lacking. Sure, we haven’t made it to the Rose Bowl yet, but on the other hand, I actually believe that we will go someday. And we’ll go with Tedford as our coach.

I mean, I finally actually got to touch the Axe, right? I gotta believe.

Rally members who graduated from Cal without seeing a Big Game win finally get to hold the Axe for the first time. Note the huge smile on my face — I’m the one in the blue and gold rugby and Cal hat