who’ll be first against the wall when the revolution comes? 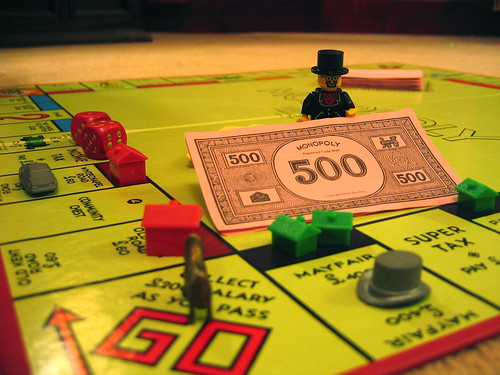 I’m pretty angry over what went down at my bank today. You see, I got a WaMu account back about four years ago, and I was pretty happy with them. They weren’t perfect, but there was something friendly about them and they made a point of mostly staying out of the way between me and my money, which I really appreciated.

But of course, WaMu was stupid during the whole real estate bubble, and when things got ugly, it collapsed and was bought up by JP Morgan Chase. And over the past year I’ve been watching the transition, and every bit of it has just seemed like the bank’s gotten colder and unfriendlier. To begin with, today was the first time I’d walked into my branch since the transition. WaMu used to have this open floorplan — the tellers had podiums in the middle of the room, and the banking operations were scattered around the edges. When I first walked into the bank today, they’d placed the tellers in a more traditional counter and gave the banking operations what appeared to be cubicles. Granted, I was already predisposed to disliking them, but the sterile feel just really bugged me. But okay, I can deal with it.

So I bring my checks up to the counter. Now every other time I’ve done this, they said “Sure, no problem, we can cash those.” Today, I get informed that they can cash the Chase check, but the Wells Fargo one? Nope, it’s going to have to take a day to clear; if I’d had the amount of the check in the account, they’d be able to give me the money, but it’s just not possible. Of course, with today being the day before Thanksgiving, what they really mean is that I won’t have that money until Friday. When did this change? I asked. Last month, I was told. Nnnnnnn. You might try Wells Fargo, they said, but they might charge you a fee.

Okay, I said, just out of curiosity, what happens if I close the account with you and then bring in a Chase check to be cashed? “Oh, we charge a $6 fee for that privilege.” Double you tee effing eff? SIX BUCKS? To cash a check written on your bank?

There’s a reason there’s a nasty mood involving bankers in this country, and it’s right there in the nickle and dime fees they throw at you. If I bring in a check written on your bank, WHETHER I HAVE AN ACCOUNT THERE OR NOT, you should cash it cheerfully and promptly, without demanding money from me for the privilege. If you have a problem, it’s your account holder that wrote the check, generally I’d assume you know where to find them.

If I have a working relationship with your bank, and I bring in a check from another bank, again, one would think you should cash that cheerfully and promptly too, although I can understand that a bit better. (Although I don’t understand why WaMu didn’t care and Chase is nasty about the policy.) But still, in this day and age of electronic funds transfer, I don’t know why things can’t go faster. :P

But seriously, it’s the tickytack fees and the appearance of living high on the hog when the rest of the country suffers from something you caused — yeah, it’s no fragging wonder bankers aren’t exactly the most popular of people right about now. And God help them if the lid gets blown of the pot of simmering resentment.

But no, consider this a straight recommendation that, if you have a choice, AVOID CHASE. They’re just….nnnnnnrgh. (Actually, at this point, I’d be avoiding any of the monolithic chains — Chase, BofA, Wells Fargo, Citi — as it just seems there’s too much of a potential for them to be assholes in the name of greed.)

Anyway, that ends this rant.

[EDIT: So at lunch, I walked the other check over to the Wells Fargo across the street, and they not only happily cashed it for me despite my not having an account (and they only asked me twice if I wanted to open an account there), but they didn't charge me anything. So yeah, maybe Wells Fargo isn't quite as evil. I still hate Chase, though.]